Setup Swarm Mode in 1.12 on Digital Ocean with Failover

Hey, only got a few minutes to learn something new on Docker? Let's setup a 2-node cluster that runs the same Docker Hub image on each.

TL;DR: Here's the commands we'll use, in a quick reference list

Docker puts a lot of effort into ease-of-use in its tools. Setting up the Docker 1.12 Swarm Mode is a great example of that. It takes minutes to get it working.

NOTE: This tutorial skips how you would setup a static content website using a GitHub repo and maybe build a Docker image from it, and focuses on the Docker features for enabling high-availability.

I Thought Swarm Has Been Around Years

Swarm Mode in 1.12+ isn't the same as Docker Swarm, which I refer to as "Classic Swarm", which was actually a separate service that has been deprecated in favor of what we're about to enable.

Here's a list of features in the new Swarm Mode. 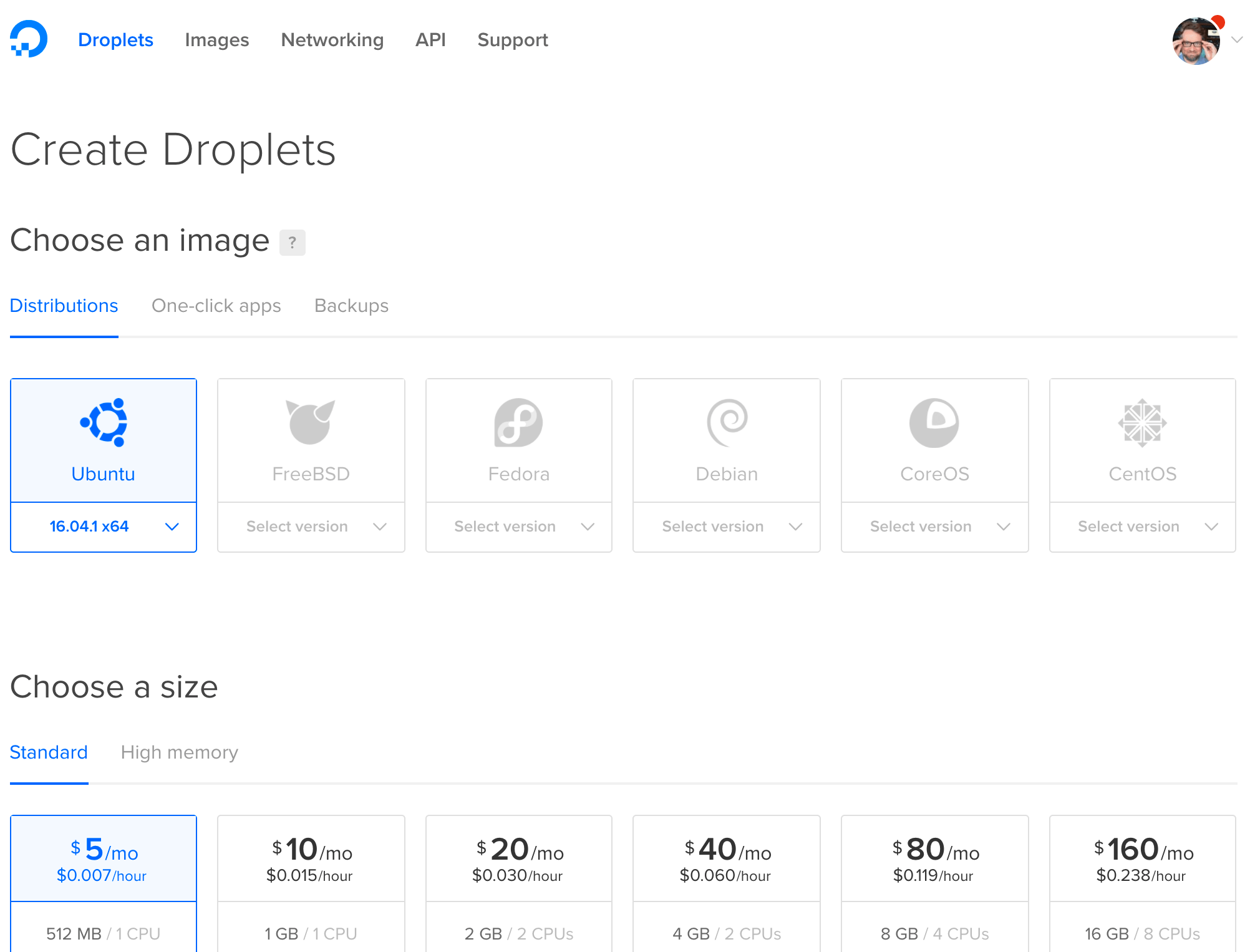 These two swarm nodes don't need private networking, as they can use their default public IP's to communicate with full encryption (including any traffic between container apps, if we choose). The service ports on a swarm default to TCP:2377, TCP/UDP:7946, and TCP/UDP:4789 and with encryption and certificate authentication turned on by default, we can feel better about them being exposed to the Internet. 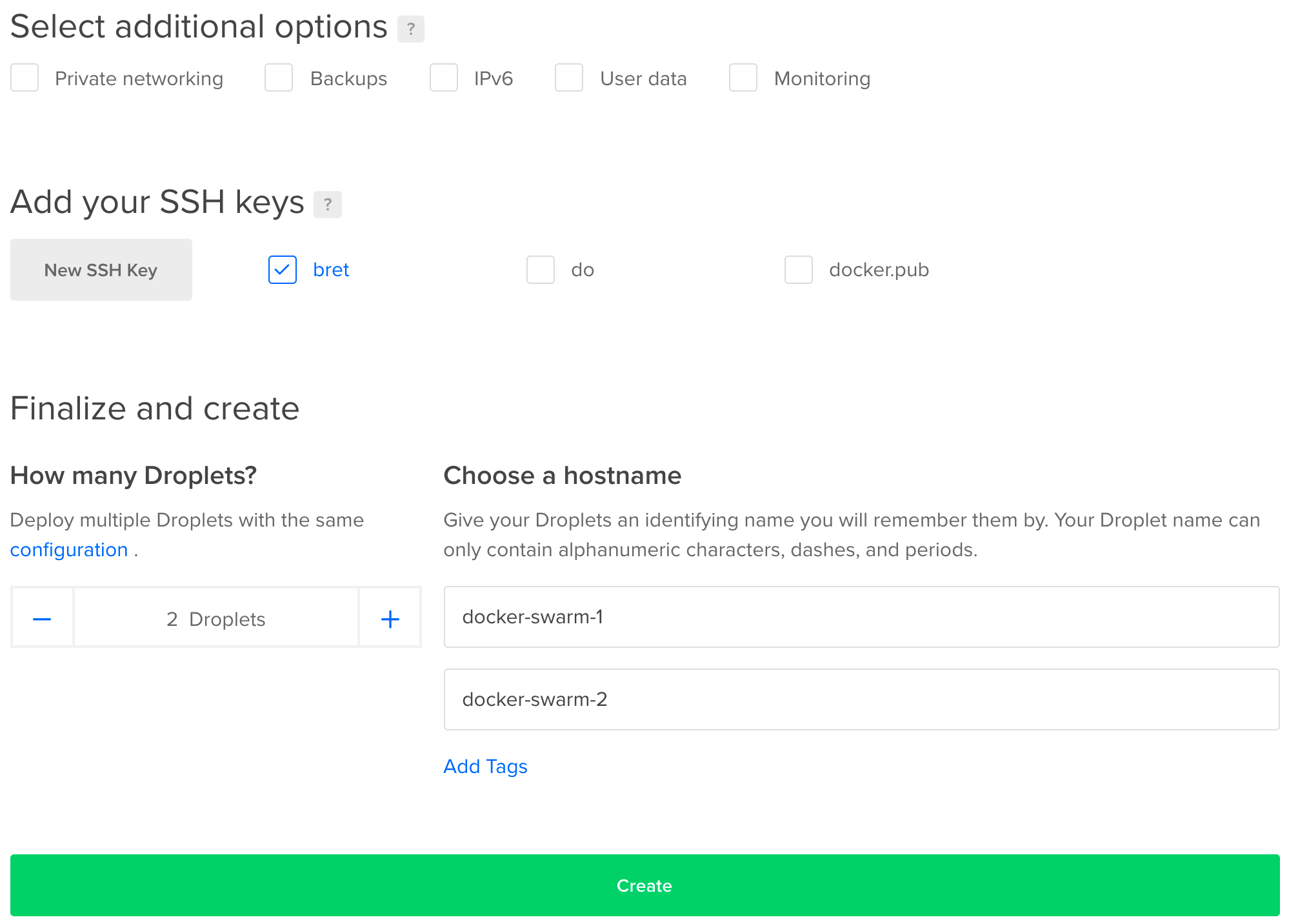 Ensure you upload your ssh key if you haven't before. Now let's this party started!

Docker has a wonderful shell script we can use to check for any required dependencies and finally install the latest Docker release. It will set the daemon to start on boot. There are three versions we can choose from, which enable different sets of features. We're choosing main but you can also choose experimental to get features like "checkpoints" and "DAB files" that are marked as "not fully baked and may change before release". We'll install the release version do this on both nodes.

Let's grab those IP addresses, SSH into both, and do what what we came here to do. Run this on both:

Once it's done, run docker info on both and if you get back service information, so we know it worked and docker is running.

Ok that was the hard part. From here it's a little anti-climatic. On the first node, we run:

Note that you may get back an error like this:

This just means docker see's multiple IP's on the host and can't figure out which one to use for servers talking to each other. I'll use the public IP for mine:

We'll get back a random key that we should copy and use to join the 2nd node. This key prevents rogue servers from trying to join our swarm. Notice that this key is to join a worker node to our swarm. The first node we just created is a manager and has powers to control the swarm, unlike a worker that just takes orders. One manager is fine in this config, as losing a manager doesn't kill containers on other nodes, it just means you'll need to bring the manager back online (or create a new swarm) before doing any Swarm activities like changing services. The other reason we don't want two managers here is that Swarm managers use Raft to store data about the cluster, and it needs an odd number of managers to maintain consensus, so two managers wouldn't provide manager HA, we'd need three for that. This single manager scenario still gives us HA Nginx.

On node 2 let's paste in that command it gives us (your command will have a different token and IP obviously):

We now have a swarm with nodes! Almost magic!

Let's deploy a simple Nginx web server to it, so run this from the manager node:

That created a Service, which is a new concept in 1.12 that uses Swarm Mode to control the scheduler. The service create command will ask the scheduler to execute a Task to start a nginx container on one of the nodes. Let's check to see if it's started:

We should see 1/1 running. Notice at this point we're only running one container on one node. Let's check the public IP of that node where it's running to see if we get the nginx default index page.

Just to confirm only one is running, let's see about the other node.

Did you just see how the node didn't matter? Docker's new Swarm Mode also includes the Routing Mesh, a packet forwarder that causes every node in a Swarm to listen on published ports, and forward packets to the proper node/container. To take advantage of this for a http site, we could use DNS Round Robin to ensure our site stays up even if one container or server fails.

Hey did you know modern browsers automatically use multiple DNS records for the same URL as a low-budget way to gain failover fault-tollerance? It's great and can truly help you achieve HA in a lot of web site scenarios without needing a hardware load balancer in front just to gain HA. Read more.

Scale Our Nginx Across Servers

Routing Mesh is cool, but if the host that our Nginx container is running on dies, we still loose our web site. We made this Swarm so our web app could be highly-available, so let's do that. Run this command to spin up a 2nd container from the same image:

And if we check our task list again, we should see the second container spinning up.

Take Out 1: Kill A Container

BONUS: Remember that Swarm Mode is also a scheduler? Well it now understands that we always want 2 containers running for our nginx service, so if one goes missing, it'll schedule a new one. Let's force remove one from docker so the Swarm scheduler will fix it:

If you're fast enough with the tasks command, you'll see that container disappear, then get recreated. We can tell it's a new container by it's randomly generated name and uptime.

BONUS: I know we'd never want to just run a generic Nginx... but a simple way to serve a website that, maybe you created with a static-site-generator would be something like: